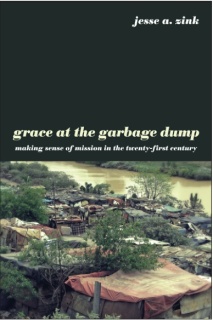 I do not know Jesse Zink well, but we both volunteered at the same radio station in Nome, Alaska. He followed my time there, with no overlap, but our paths have crossed occasionally. Via the internets, I followed his trek from Nome to Itipini, South Africa through his blog at that time. Zink now has a book out about his time in SA called Grace at the Garbage Dump. Zink did not ask me to read or review his book, but he’s a challenging theological thinker and writer, so I acquired a copy for myself to see what he had to say. I was not disappointed.
Itipini means “at the dump” and Zink went there to work in a clinic through the Episcopal Church’s Young Adult Service Corps (YASC). Zink makes no bones about his struggle with the term “missionary” and his painful awareness of a burgeoning messiah complex. Even as the post- apartheid situation of painful race relations, socio-economic struggle, and rapid social change unfolds in front of him, Zink seems to think each difficult situation is an anomaly. Until it becomes obvious it isn’t.
Very quickly, the reader comes the crushing realization through Zink’s words that you cannot save people with whom you cannot communicate. The language barrier between Xhosa and English isn’t simply a hurdle, it’s the long jump where Zink takes a flying leap, falls on his face, and then is helped to limp around the track of conversation by the people he expected to be helping. Zink writes:

As I sat down with my journal one evening, I realized something new. I wrote, “In this year I will need to shift my focus from doing to being… I need to realize that perhaps the greatest gift I can give right now is that of a loving and supportive presence. I won’t be able to quantify the results of my work. I am not at peace with this.” The Western, results-oriented culture was a deeply written part of my identity. But I had reached a place where I was no longer as able as I am in my own culture. Though I could acknowledge to my journal that who I could be in Itipini was more important that what I could do, it took many months before I could even begin to be a little comfortable with the idea. (p. 33)

You cannot save people who do not want to be saved. Zink’s devastation is veiled, but only thinly as he watches people slide beyond treatment for HIV or AIDS, despite the availability of anti-retroviral medications. He recounts men and women who wait too long for testing or who put off blood counts or check-ups. Deciding how to respond to the behavior of other competent adults with which you disagree is a challenge in any culture. It is made even more complicated and painful, when one questions life and death decisions:

The trouble is that effective education and true empowerment take enormous amounts of time, and often there are preexisting- and incorrect- assumptions that need to be broken down and overcome. HIV, [tuberculosis], and burns killed much faster than we could educate, leaving us in an uncomfortable position. Either we mandated behavior to people whose guests we were, with the likely result that the mandate would be ignored, or we let people make their own decision and watched the predictable results unfold, powerless to stop them. We had done our best to muddle through. The end result of that muddling was that we stood by ineffectually as preventable deaths unfolded before our eyes.
The aphorism “Give me a fish, feed me for a day; teach me to fish, feed me for a lifetime” is well known. But it has nothing to say about how long it takes to teach someone to fish or about what can be done in the interim period until they have made that knowledge their own. “Live and learn” is often used to exculpate ourselves from situations where we’ve tried to teach someone but made no progress. Thinking about the deaths of Thandeka, Lindumzi, and NoFirst, I was left asking, “But what happens if they don’t live?” (72)

Finally, you cannot save people through money without relationship and the relationship may not be enough. Zink is clearly able to understand the painful connection and difference between becoming a source of funding as a means to life and doing the same as a way of life. He struggles, intensely, with the times that he has to function as a piggy bank, broken up and divided out for small needs. The reader can sense his struggle with incarnational ministry in these moments, he is present, but is discomfited with the role of being Christ’s wallet. It’s not the bodily image that he (or any of us) imagine filling when we work with other people.

I moved to South Africa full of good intentions and the desire to serve and even save people, to put their needs ahead of my own and figure out the ways in which I could help. It wasn’t until I failed Nolizwi so dramatically that I realized the trouble with this way of thinking: it puts the onus of action- and responsibility- squarely on my shoulders. And the results of my actions, no matter how good my intentions, are beyond my control. That’s doubly true when my actions were mediated through a series of culture and language barriers I couldn’t ever fully understand. I tried, and tried hard. And I failed.” (155)

Ultimately, Zink comes to terms, in part, with what he already knows. Only Jesus saves and He has already done so. Mission belongs to God, Zink writes, and we are gifted with relational opportunities as a result of God’s mission.
It could be very easy to criticize Zink’s motivations, hesitations, or lessons learned. He’s young, hopeful, and drawn by the call of the Spirit into relationships with the least, little, and lost. He has not yet developed the hard edge of cynicism of years of church service. He’s not yet overanxious about budgets, councils, and general conventions. He still believes change is possible.
If you think that way (and maybe you don’t), here’s my question for you: do you want him to be hardened? Is that the goal of the church- to wring service out of her youth, call them into parishes, and drain the joy of salvation from them like sap from a tree? Certainly not. Zink’s writing reveals a heart for service that was the key to the early church and is the hope of the future church. His work since returning to the US from Itipini has included studying for ordination, but also travel to other African countries. His writing on the church and people of South Sudan and its potential for a bright future is informative and motivating.
Mission work, even medical and educational missions, has the distinct possibility of becoming the new voice of colonization in the nations of the African continent. The seeming stability of churches and church workers teeters dangerously between empowerment and empire. Zink, and voices like his, raise this concern and point to the delicate work of beingin a place where God is already doing. We do not save, we do not undo history, and we cannot slingshot people into a technological future, which they may or may not wish to embrace. We sit with, we cry with, we learn with. We abide.
I highly recommend Grace at the Garbage Dump for your personal reading, if not for your church book club or any Christian education class from high school and up. In particular, if you are in a denomination that talks about the conservatism of the churches in Africa, this book is for you and yours. What does it mean to be the body of Christ with limbs across the world? A body with limbs that are dying from AIDS, TB, and malnutrition? A body that is schizophrenic about social issues and divides against itself? We cannot undo that we have been made one in Christ because it was not our doing. Thus, we are God’s mission- a mission of relationship and reconciliation. The goal of that mission for us, according to Zink, is to learn to spot grace. Everywhere. Even at the dump.
Zink, Jesse A. Grace at the Garbage Dump: Making Sense of Mission in the Twenty-First Century. Cascade Books. Eugene, OR. 2012.
This book was received from the publisher for review at the request of the reviewer. No promises were made to the author or the publisher in exchange for a review copy.

2 thoughts on “RevGalBookPals: Grace at the Garbage Dump”