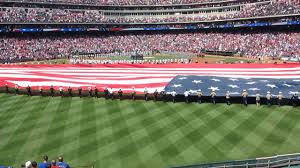 Here is something about me as an American citizen pastor person:  I don’t “pledge allegiance to the flag of the United States of America.”  My friends and family and churches may not even know that about me.  When people stand to make their pledge, I simply stand with everyone else as a sign of respect.

If no one notices I don’t salute or pledge, that’s fine with me. If asked, I will confess that my allegiance — my loyalty, heart, and life itself — belong to God.  I give to my country my fair share of taxes, time to stay informed about current events, regular voting, and my work for justice, peace and freedom.   I don’t give my allegiance to a flag &/or “to the republic for which it stands.”  That’s me. Your mileage may vary.  I am not trying to make converts.

On an August day in 1974, I was a very young adult at a Texas Rangers baseball game.  I had only voted the one time, and this ball game was soon after President Nixon resigned from the presidency.  He had broken the law, then others had covered up for him, and then he had lied about it all.  When the truth came out, he resigned.  President Nixon left the White House with much of his dignity left.  In the end, he had done a good thing for our country by walking away.  The government worked; the Constitution prevailed; the foundation of the democratic republic held firm.

At that baseball game, I stood up with the crowd for the singing of the National Anthem.  For once, it seemed that everyone was actually singing enthusiastically, me included.  Thousands of voices sang out pride in our country and conveyed a collective energy to keep on going.  The soaring melody sounded like hope for the future after some really hard and yucky stuff.  It was the chill bumps, lumpy throat kind of unified pride in our country which was still there, flag and all, healthy and working.

The only other time I have experienced that degree of “citizens united” was after the horrible events of September 11, 2001.  People came together. Strangers embraced.  Folks came back to church. Blood banks overflowed.  Congress unilaterally supported the President.  The crowds’ lament:  What a shame that it takes such a tragedy to bring us together.

I hear the same thing at funerals, as a pastor and as a family member. Why does a loved one’s death have to be what brings us together?

We are in Day Three of the Government Shutdown, a national tragedy that has shown little power to bring a nation together.  Partisanship itself created and enflamed this tragedy.  The key players have taken a stance on opposite sides of a great chasm.

As the divide widens, the tragedy looks like it’s gaining strength.  Perhaps this constitutional storm is gathering up the very power it will take to bring our country back together, citizens truly united, “one nation . . . with liberty and justice for all.”  Empowered, some people will step up and take courageous action to do the right thing for all the people.

In politics, they will call that giving up, giving in, losing.

And there will be singing.

“Never doubt that a small group of thoughtful, committed citizens can change the world. Indeed, it is the only thing that ever has.” (Margaret Mead)

3 thoughts on “United We Sing”