Scripture can be found here…

The Narrative Lectionary skims over a couple of centuries to bring us to what is arguably, along with the story of the Exodus from slavery in Egypt, one of the two most important events in shaping the identity of God’s covenant people: the Babylonian exile. After the defeat of the Assyrian empire by the Babylonian empire, there were three separate deportations of Jews to Babylon, which took place in the years 597 BCE, 587 BCE, and 582 BCE. In this week’s passage, the prophet Jeremiah is addressing those removed from Jerusalem/ Judah in the first of these deportations. This occurred after Judah had “rebelled” against its status as a client-state of Babylon, and Nebuchadnezzar had laid siege to Jerusalem and pillaged the temple, installing Zedekiah as a puppet ruler. The first wave of deportations was thus carried out,  sending the upper classes (the elders, priests, and prophets, as they are described in 29:1) into exile in Babylon. *

Jeremiah’s word from God to the exiles comes as a surprise. First, and we probably shouldn’t be surprised by this, God takes responsibility– these are God’s words to “all the exiles whom I have sent into exile from Jerusalem to Babylon” (29:4). If the people are experiencing anger towards the Babylonians, God seems to imply it is misplaced.

There follows a stunning list of directives: Build houses and live in them; plant gardens and eat what you grow; settle down, get married, have families. Don’t let your numbers decline. In short, don’t stop living. Don’t wait until an elusive “some day” to get on with the business of continuing to be God’s covenant people. And, perhaps the most difficult directive of all: “But seek the welfare of the city where I have sent you into exile, and pray to the Lord on its behalf, for in its welfare you will find your welfare” (29:7).

God is not encouraging rebellion against the oppressive superpower. God is encouraging the covenant people to bloom where they are planted. To make the best of things. To thrive, despite their devastation.

God goes on to explain through Jeremiah that anyone who prophesies otherwise is a liar. God offers a sobering forecast: seventy years, and not a moment less, will pass before God will end the exile and bring the people home. With a life expectancy of about 35 years, that means that the exiles could plan on their grandchildren returning home. Maybe.

In other words, don’t plan. The passage comes to a conclusion with the assignment of the task of planning to God. God promises that God’s plans are for the people’s welfare and not their harm, to give them a future with hope.

Then when you call upon me and come to pray to me, I will hear you.

When you search for me, you will find me; if you seek me with all your heart,

I will let you find me, says the Lord,

And I will restore your fortunes, and gather you from all the nations

and all the places where I have driven you, says the Lord,

There’s a subtle kind of paradox operating here: the promises of a future restoration combined with admonitions to live in the present, thus encountering the living God who will make that future possible.

1. What kinds of exile do the people in our congregations face? For some it may be a sense of displacement because of literally having moved from a beloved hometown. For others it may be the loss of the home associated with aging and the need to live in retirement communities or skilled nursing facilities. For some, there may be a sense of exile from the their own body as a result of illness, injury, stroke, amputation. For others, an exile from their sense of self after the loss of a job or being laid off.

2. How can we help the congregation enter imaginatively into the experience of the exiles? Is there any parallel loss to a sacred place they can connect with? 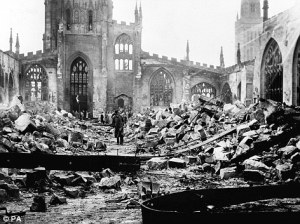 3. The loss of “Christendom” (with Christianity but one faith in the vast marketplace of ideas and philosophies) suggests to some that followers of Jesus’ Way are, themselves, in exile in this culture and in the church. Would this idea resonate for your congregation?

4. How are the exiles being asked to trust God, and can those in their particular “exiles” in your congregation be invited to the same kind of trust?

I look forward to our conversation in the comments!

* This passage has been edited to reflect corrections and clarifications regarding the historic background. Thanks so Tony Stoutenburg for his help!