(With apologies to Revgals who don’t live in the USA)

Here in the United States, we’re preparing to celebrate Independence Day, commemorating the signing on July 4, 1776 of the Declaration of Independence.

“We hold these truths to be self-evident, that all men are created equal, that they are endowed by their Creator with certain unalienable Rights, that among these are Life, Liberty and the pursuit of Happiness,–That to secure these rights, Governments are instituted among Men, deriving their just powers from the consent of the governed….”

Lately, I’ve heard a lot about people concerned about protecting their own freedom, their own liberty. But before the authors of the Declaration got to life, liberty, and the pursuit of happiness, they said all of us were created equal.

In the prologue to her book, Our Declaration, Danielle Allen writes:

“The Declaration of Independence matters because it helps us see that we cannot have freedom without equality. It is out of egalitarian commitment that a people grows—a people that is capable of protecting us all collectively, and each of us individually, from domination. If the Declaration can stake a claim to freedom, it is only because it is so clear-eyed about the fact that the people’s strength resides in its equality.”

We’ve set up a system of laws that have balanced freedom with equality, which means we’ve also agreed to regulate our own freedoms to ensure the equality of everyone’s freedoms. It means we’ve acknowledged that our freedoms aren’t more equal than the freedoms of others.

We see this often in free speech cases. We, as a nation, value the right to speak freely. And that means we have to tolerate speech we find odious. The Westboro hate group gets to protest at funerals with their offensive message because it is in defending their freedom of speech that all of us maintain our own.

As a nation, for over 200 years, we’ve regulated our freedoms in order to protect those same freedoms.

Which is why I’m very concerned for the future of our freedom in light of recent Supreme Court decisions.

Last week, the court determined a 35 foot buffer zone around women’s health clinics was too great a restriction on the free speech claims of protesters. While this may seem to be a victory for free speech, it privileges the speech of a few over the physical safety of women and others entering those buildings. Massachusetts passed the law in the first place to respond to two fatal shootings of employees entering clinics. Where is a woman’s freedom to safely make her own health care choices protected in this decision?

This week, the court decided private corporations (namely Hobby Lobby and Conestoga Wood) can have deeply held religious belief and choose not to offer access to contraception in their health care plans. This was supposed to be a narrow decision, but the Court has already expanded its scope, proving Justice Ruth Bader Ginsburg’s point in the dissent that “the court, I fear, has ventured into a minefield.”

Headlines in the media have declared this was a victory for champions of religious freedom.

Nothing could be further from the truth.

This case is a victory for one particular religious viewpoint superseding the religious freedoms of everyone else. As Ginsburg said,

“Religious organizations exist to foster the interests of persons subscribing to the same religious faith. Not so of for-profit corporations. Workers who sustain the operations of those corporations commonly are not drawn from one religious community.”

Well meaning people have said to me, “Is this really such a big deal? It’s only 4 kinds of contraception they don’t want to cover. Can’t you choose another?” 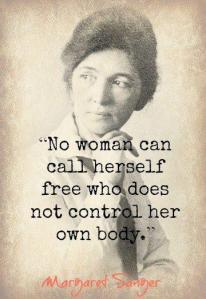 Yes, it is that big of a deal.  Even if it were only one kind of contraception excluded, I would be as concerned. The concerns I (and so many others) have about this decision is summed up in this remark from Ginsburg’s dissent:

“Approving some religious claims while deeming others unworthy of accommodation could be ‘perceived as favoring one religion over another,’ the very ‘risk the [Constitution’s] Establishment Clause was designed to preclude.”

To be clear, I believe the owner’s of Hobby Lobby have the religious freedom to use or not use whatever form of contraception they want to use. I support their freedom to disregard the views of the scientific community that has declared these 4 forms of birth control are not abortifacients. I even support their ability to purchase many of the products they sell cheaply from China, a country known to promote and even require abortion to keep its one child policy in place.  I support their freedom to worship wherever they choose.

I support their freedoms in all of those areas, even if they are different choices than I might make, because in defending their freedom, I protect mine and everyone else’s. We hold these truths to be self evident, that all are created equal.

The Supreme Court, in granting their request to micromanage a woman’s health care choices, has compromised the equality of our freedom. Once we decide  one religious view is more important than another, we are all less free.

As you celebrate this weekend, with watermelon, fireworks, water skiing–whatever it is that smells like freedom to you, I hope you will consider the relationship between freedom and equality. Allen writes:

If we abandon equality, we lose the single bond that makes us a community, that makes us a people with the capacity to be free collectively and individually in the ﬁrst place.


I’m ordering a copy of her book for myself. I might just send one to the Supreme Court justices too. Seems our equality is not as self-evident as the founders hoped it was.

One thought on “Land of the Free?”