Well, preaching colleagues, it’s almost Sunday again. Some of us are still riding high on last week’s Hallelujahs, while others of us are wishing there was another day (or week!) between Sundays at this time of year. We are preparing to celebrate a mini-Easter as we do every Sunday, but the memories of the big-shebang-Easter last Sunday are still ringing, for better or for worse. 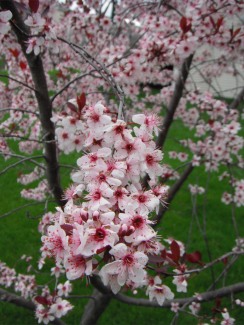 The Revised Common Lectionary juxtaposes frightened disciples hiding in a locked room on Easter evening and the week after (in John 20) with those same disciples courageously preaching and healing in public to the point that they are arrested by the authorities (in Acts 5). The difference is that the Holy Spirit has come to them in the meantime (Acts 2), but we don’t actually hear that story until Pentecost Sunday on May 15. So, how do you address these various attitudes of the disciples this Sunday? Some ideas where shared here earlier this week. Please add your own thoughts to the mix!

The Narrative Lectionary jumps right into Acts, with the disciples (both men and women!) ordered to stay in Jerusalem to witness the ascension of Jesus, and dedicate themselves to prayer. What does this mean to you and your community? There is some discussion on this page. Please share any other insights that you have!

Some of our churches are celebrating Holy Humo(u)r Sunday this weekend. Please share your lighthearted plans and jokes with the community! Many of us are responsible for children’s sermons, for which ideas seem always to be in demand in this forum. Some are beginning an Easter season sermon series this week. A few years ago one of the best things I did was to invite guest preachers for our partner ministries (social services, nursing home, camp, etc) for the entire season of Easter – so I preached on Easter, and next on Pentecost. What are you doing this year? Please share any ideas with the group so that we can all prepare to celebrate the Resurrection again with joy!

Depending on your mood and your time zone, I can offer a glass of tea or wine, some popcorn or some fresh fruit. Pull up a chair, enjoy the virtual snacks, and blessings on your writing. Welcome to the party!