The adult education group at the church I serve is studying Daniel. It is very interesting to talk about how the Bible is put together and used differently by different groups of people. Daniel is counted with the “major” prophets in Christian scriptures. The book is part of the writings in Jewish bibles. In talking what the same book reveals and teaches in its varied receptions, we are beginning to play with the idea that history isn’t only what is written by the winners. History is also what gathers uncollected in attics or is left behind in basements. History is the stories that passed down and down again until they became a whisper of what they were, but that whisper still lives on the wind. History is the imagination of something different and that sliver of a thought evolves until it becomes a living breathing movement.

There are two alternative histories on bookshelves and being discussed everywhere right now. Both books discuss worlds in which black people are not people, not even close. They are barely bodies to be used, abused, worked, experimented upon, and disregarded upon discarding. As I re-read that sentence, I feel compelled to remind you, the blog reader, that these are alternative histories- imagined stories around real events.

This book imagines a modern-day America where the Civil War never happened. In
compromises between states, the Constitution was amended such that slavery could never 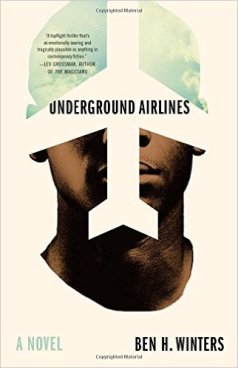 be outlawed by the federal government. In the present day, slavery remains in the “Hard Four”- a unified Carolina, Alabama, Louisiana, and Mississippi. The effort to help enslaved persons escape is worked through Underground Airlines, a similar set-up to the Underground Railroad, but using airline terms (baggage handler, pilot, flight attendant) instead. Since persons escaping enslavement would have to cross state lines, the federal marshals are involved in recapturing the lost or stolen “property”. The book’s narrator is a man who escaped enslavement, working with the marshals to capture other escapees.

The book’s pacing is like the foxtrot- slow, slow, quick, quick. At times I was worried about how much I had left and then at other times, I couldn’t read quickly enough. Due to the first-person nature of the narrative, the other characters are not fully fleshed out in motivation or description, but they cling to the imagination. There are cell phones and pay phones, internet and intranet, Michael Jackson is real in this book and was the second World War. It is interesting to dive in and out of real history and historical people.

What is painful is knowing that we do live in a world where the America Civil War (the War Between the States) was fought and yet the lives of many black Americans has not been significantly improved. What would an alternative history that included reparations look like? I recommend this book for you personally if you like this genre or for your church book group if you’ve read Between the World and Me or book about present racial dynamics in America. This is a good book to take a conversation to the next level. If you live outside the States and don’t know of a book similar to this about your own country or region’s history, it may be worth reading this book and then discussing what might have happened without some of the history-altering events of your past.

The Underground Railroad by Colson Whitehead

I am not sure if RGBP has ever echoed an Oprah endorsement before, but here we are. Since I usually find myself with books up to my armpits (and stacked higher than my head), I don’t usually know about such accolades until I go to write about the book myself. Nevertheless, The Underground Railroad is an interesting mix of imagination and horrific reality.

Cora is a third-generation enslaved woman on a plantation in Georgia. Her escape from that setting does not exactly lead directly to an easier life. With the Underground Railroad re-imagined as an actual railroad, Cora and others are still at the mercy of those who can help them move further north. Within the story, there are discussions of how to sterilize black women at the same time there are scientific experiments on black men. Some of the white characters scheme to entice immigrants to work on cotton plantations, imagining that the issues with that labor will be less tiresome than the issues of enslaved labor. (Sigh)

In criticisms of this book, I see people saying it is “too violent” or that the characters are not fully developed. Frankly, the book is probably not violent enough in its descriptions of enslaved life. Furthermore, I think the flat affect of the characters in the novel depicts the numbness that comes with living in fear and constant worry. Cora can never really allow herself high highs in part because the threat of such low lows is always a shadow out of the corner of her eye. The alternative historical parts of this book are written well enough that the reader will look up and think, “Wait, is that true?”. A little side reading may be warranted.

This is a good book for a group that has not yet read a more difficult story about modern racism or historical race issues in America. It will be challenging, but it allows the reader to ease into the conversation. Readers who push back, arguing that “things were better than this” should be told to “sit down” and listen, perhaps followed by some time in silent prayer.

All told, I think either of these books make an excellent conversation starter and I recommend them both.

The Reverend Julia Seymour serves Lutheran Church of Hope in Anchorage, AK. She blogs at lutheranjulia.blogspot.com. She contributed to There’s A Woman in the Pulpit.

*****
RevGalBlogPals encourages you to share our blog posts via email or social media. We do not grant permission to cut-and-paste prayers and articles without a link back. For permission to use material in paper publications, please email revgalblogpals at gmail dot com.
*****