There’s a cloud over your ballot.

No, it’s not rigged or marked to be trashed or about to get literally soaked by rain or snow. 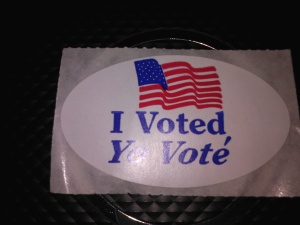 I mean: there is a cloud of witnesses over your ballot.

Yes, you… there in the small booth or at your kitchen counter or in the post office or marking on the back of a library book that might be overdue. I see you. And they see you. The witnesses.

The friend who had a late-term abortion because… her reasons are not your business.

The people in other section of your district who are being disenfranchised because their community went from having six polling places to one.

The sibling who is being harassed about bathrooms, but just wants to pee safely.

The people who have been arrested, harassed, and beaten over #BlackLivesMatter, but who still keep the faith and the fight.

The witnesses see you. They see you when you say it does not matter. They hear you say that all the choices are equally bad. They smell the stench of rank privilege when you leave choices unmarked, because you want to “make a statement”.

Oh, you’re making a statement. The statement is that nothing matters more than your disenchantment.

Not your neighbor’s health, not your friends’ marriage, not your sister’s maternity leave, not your brother-in-law’s imprisonment, not the right of Native Americans or black Americans or immigrant Americans.

Americans vote on the Tuesday after the first Monday in November. It’s in November because the harvest was probably done, but traveling is not yet impaired because of winter. It’s Tuesday because one wouldn’t dream of traveling on Sunday (the sabbath) and Monday was therefore needed for travel. Thus, our very election day is wrapped up in a time when voters were Christian, land-owning [white] men who owned the means with which to travel. There are witnesses to that reality in the cloud over your ballot as well.

What will you say to these witnesses?

That piece of paper in your hand on or the machine in front of you or the buttons on the screen… they literally represent blood, sweat, and tears of people who fought for the right to vote, to be heard, to be elected, to be seen as human, to live according to the proposed truths of our founding documents in their most generous interpretation. Election Day is a thin space, a slip in the atmosphere where the hot breath of every immigrant, suffragette, renter or share cropper, abolitionist, refugee, and enslaved person can be felt, can be heard, can be smelled.

The thin space feels like a weighty cloak, hefty on our shoulders as we slide the curtain closed.

The thin space sounds like the shuffle of feet, the hum of vibrating phone, the heavy clank of levers.

The thin space smells like over-bleached linoleum, stale air, and cooked coffee- heated too long in the narthex of a church that you’ve never seen before.

The thin space is crowded with witnesses– saints and souls, living and dead- who will not let you forget them.

Do you dare to ignore the witnesses? To shoulder your knapsack of privileges, tossing in casual disregard for the significance of your vote in with everything else? Do you shake off the discomfort of a thin space, pretending that you have a headache or turning up your podcast? Do you laugh and say “lesser of two evils” because you believe that no one will really ever know what how you voted- as though all decisions are equal?

Are you still trying to tell yourself that your ballot is private, that some actions are private?

The cloud of witnesses in Hebrews (12:1ff) references the heroes of the faith mentioned in previous chapter. It also acknowledges all faithful souls who are surrounding and encouraging those who are currently alive and at work in their faith journey. It is, then, not a far stretch to acknowledge that they also see unfaithful actions, actions that pretend that a neighbor will not be affected by a decision, actions that pretend faith is private and only of personal consequence.

When you vote- whether you have or you will- there is a cloud over your ballot. It is a cloud of witnesses– living and dead- who are praying with you and for you, breathing around you and in you, counting on your faithfulness, and calling to you to be truthful in word and deed for your soul and for them.

Can I get a witness?

The Reverend Julia Seymour serves Lutheran Church of Hope in Anchorage, AK. She blogs at lutheranjulia.blogspot.com. She contributed to There’s A Woman in the Pulpit.

One thought on “The Pastoral is Political: Witnesses”