On the Sunday of the Pulse nightclub shooting last year, I was preaching at my home church. (I am not the primary pastor.) I am a Metropolitan Community Church (MCC) pastor, so the shooting could not go unremarked in our worship that day in 2016. I breathed deeply, prayed hard, and did the best I could in ministering with people who were learning that 49 of us had been gunned down in a sacred place.

One year after the Pulse nightclub shooting, I was away from home. It was a Sunday, and I hadn’t planned to go to church, but I woke up feeling a deep hunger to be in worship with “my” people. We were in a quaint little town and there was a church with a giant rainbow flag flying out front in the town square, just two blocks from where we were staying. That seemed to bode well, so I walked over. I arrived a little early and sat down to take in my surroundings and peruse the bulletin to get an idea of the flow of the service. I was surprised to see no mention of the Pulse shooting in the bulletin, but I looked up and noticed a pride flag hanging from the lectern. Surely it would be mentioned in the sermon or the prayers. Or maybe there would be a small ritual, lighting of a candle – something.

But I was wrong. There was not one mention of the 49 LGBTQ people killed in the Pulse massacre. Not in the sermon, not in the prayers, not in the introductions to worship, the announcements, or anywhere else. Rainbow flags inside and out, but not one mention of our dead. I felt queasy. I left before the final hymn. On social media I wrote, “Dear churches: do NOT use our symbols if you are not going to honor our dead.”

I think I was trying to exorcise that experience on NYC Pride weekend two weeks later. I planned to go in to the city, hang out with a friend and go to the Dyke March together on Saturday night. The Dyke March is non-commodified, dyke-identified, and, as their website says, “a protest march, not a parade.” That sounded like balm for my soul. My plan for Sunday was to go to church at MCC New York and then flee the city before the giant corporate spectacle that is NYC Pride.

My friend and I watched the Dyke March from a great vantage point. There were no huge crowds. There was shade and it was in the evening so the heat was bearable. The March itself thrilled me to my core. There were three marching drum bands, and the people playing them were tough and sexy and talented. (I have always been a sucker for drummers.) There were people of all ages, skin colors, and gender identities. The protest signs were blunt and without corporate logos. It was it was exactly the kind of worship I needed, and I turned to my friend with eyes brimming and said, “April and I are doing this next year!”

Walking in to worship at MCC New York the next morning felt like coming home to my people. My pastor colleagues greeted me. The senior pastor, Rev. Pat Bumgardner, asked if I planned to march with the MCC NY float in the Pride parade. I said, “Oh no, I’ll be heading home.” Rev. Pat mentioned that the MCC float had a great placement in the parade, toward the beginning. I told her I’d think about it, but I didn’t mean it.

Then Rev. Pat threw down a sermon titled, “Rise! Resist! Repeat!” She reminded us all that the sense of rebellion that Christianity was built on is alive and well. She exhorted us to remember that all those changes that we fought for are the foundation on which we now build. She kept talking about taking to the streets. She kept repeating, “Rise! Resist!” 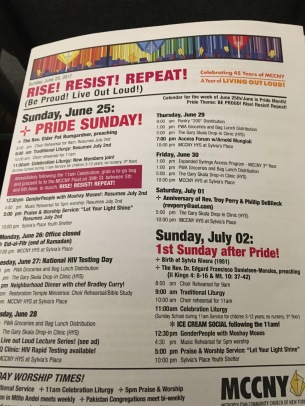 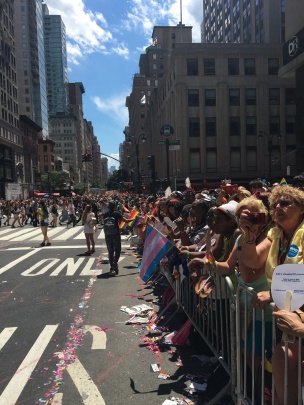 So I marched. In giant, corporate, NYC Pride. With the MCC NY choir of Broadway singers belting out songs of liberation. With an adorable young actor and a beautiful woman in a Roman costume. With three pastor colleagues and lots of others. Spectators begged for our stickers that said, “God made me Queer” and “God made me Perfect.” There were thousands of people lining the streets, screaming and cheering. It was blazing hot. It was holy.

3 thoughts on “Pastoral is Political: Queer and Holy”