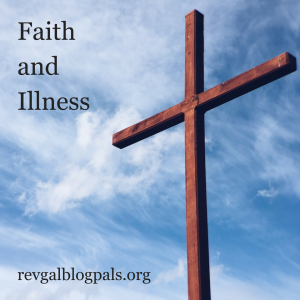 As I sat at the desk in my church office this week, I began to feel the too-familiar pain of the past thirty years.  My pelvic region felt as if there was a fire-breathing dragon residing within it.  While finishing the work, my mind began to wonder if my endometriosis was coming back…

Endometriosis is a disease in which tissue found in the lining within the uterus is found outside of the organ – often attached to other organs like the bowels, bladder and ovaries but will even migrate beyond the pelvis to organs like the liver or lungs.

I remember cramps always being a part of my menstrual journey.  I recall taking an English exam in high school plagued by horrific pains.  My pain level soared by my late twenties.  In December 2003, I had my first laparoscopic surgery.  Since endometriosis can only be diagnosed by surgery, I was diagnosed during the procedure, and much of the noticeable tissue was removed.  (See RevGal Amy Hanson’s November post on her surgery.)

Fortunately, I was able to go another nine years without surgery, although there were flairs in between.   My second surgery was in 2013 and the third in 2017.  During the third procedure, it was discovered that adhesions had caused my left ovary to become attached to the back of my uterus and the right ovary to become attached to the pelvic wall.  I could not lift my right leg without pain prior to the surgery.

I have come to the realization that this disease many never leave my body.  Menopause or hysterectomy may help, but even at that point, traces of the tissue will still be embedded in my pelvis.

When meeting others online who also have the disease, I can tell that many physicians do not have a handle on how to manage this disease.  Often the first line of defense with the pain is the prescription of birth control pills which works for many.  Between surgeries, I attempted to take the Pill multiple times in order to curb the disease.  While the physical pain was better, I was met with a hormonally-induced depression each time I tried the treatment.

Another therapy offered is Lupron, a medication created as a treatment of prostrate cancer.  The female reproductive system goes into menopause while on Lupron, starving the disease of estrogen which causes it to grow.  Many with endometriosis who follow this treatment plan speak of the horrific side effects.  Because of the depression I endured with other hormonal treatments, I chose not to try this.

There are doctors who will perform a more expansive surgery called excision.  However, I discovered that many of these doctors are not in-network with medical insurance.  Even with insurance, the doctor’s cost for the procedure extends beyond $10,000.  It’s much more affordable on a pastor’s salary to stick with a doctor in network who will perform an ablation laparoscopy, removing only the tissue they can see and leaving the deeply implanted tissue to continue causing pain.

I’ve heard how some young women in the teens and twenties are told by their doctors that pregnancy will cure the disease.  But many people will have the disease return after giving birth.  Many will find it difficult to become pregnant because adhesions or endometrial tissue creates obstructions.

Frankly, it’s becoming frustrating that this disease does not have more mainstream treatment plans.  Like Lena Dunham, after multiple surgeries and therapies (including the expensive excision), the decision is made to remove the organs.  There is no cure for this disease; even with a hysterectomy the disease can return.

I’ve often felt like having this disease is the equivalent of being the hemorrhaging woman from Mark 5.  In the story, she spends much money, time and resources to find wellness, continuing to have this health issues with no resolution.  Likewise, many of our neighbors find themselves exhausted attempting to find treatment options.

Those of us with female reproductive organs (including transgender men and gender non-binary friends) deserve therapies that will delay the progression of this illness.  Like I mentioned in my January 29, 2018 Pastoral is Political article entitled “The Dangerous Theology of Women, Bodies and Pain”: “Our faith tradition is rooted in an origin story in which the first female human is cursed to moments of pain for the choice she made… While Adam is condemned to physical labor, Eve is given the sentence of physical pain in childbirth.  This story almost lends itself to affirming a divine curse.”

It’s not easy being a pastor when your pain level extends beyond a six or seven.  On Sunday mornings, we are called to be in the pulpit even when our bodies are demanding us to rest.  If ten percent of people with female reproductive organs have this disease, this also extends to those of us in the pulpit.  And yet, many with horrific period pain will preach, offer pastoral care and attend meetings all the while no one knows the extent of our agony.

As March is Endometriosis Awareness Month, the important message to spread to others with female reproductive organ is this: periods were not meant to be painful.  If you or your loved ones continue to have pain with periods or doctors are not taking the appropriate steps to find the best treatment, find a physician who will take the pain seriously.  Even doctors who are not familiar with excision procedures will still offer care without being dismissive.  This pain is not God’s punishment, and through the healing actions of Jesus, we see that all of us warrant healing of this and all chronic diseases.

The Rev. Michelle L. Torigian is the Pastor of St. Paul United Church of Christ, Old Blue Rock Road in Cincinnati. Her essay “Always a Pastor, Never the Bride” was in the RevGalBlogPals book There’s a Woman in the Pulpit. She also has chapters in the books Sacred Habits: The Rise of the Creative Clergy and A Child Laughs: Prayers for Justice and Hope. Torigian blogs at http://www.michelletorigian.com.

This is the fifth essay in our series on Faith and Illness. Click the links to read Passing Through the Waters, by Rachael Keefe, about living with POTS (postural orthostatic tachycardia syndrome) and symptomatic bradycardia; Sabbath, being still, and chronic illness, by Amy Hanson; Living with Celiac, by Beth Birkholz; and Living with IBS and Hyper-Mobile Joint Syndrome, by Julie Rennick. If you are a clergywoman with a story to tell about faith and living with illness, email revgalblogpals@gmail.com to inquire about writing for the series.

5 thoughts on “Faith and Illness: The Wrath of Endometriosis”