Join RevGalBlogPals at the Franciscan Center in Tampa, Florida, for Big Event 2020: From Vision to Action. Click here to register.

Three outstanding clergywomen will share their stories and help participants explore how a vision for ministry becomes action in the world. Our week will include worship, plenary sessions, breakout and affinity groups; options for yoga, coaching, and spiritual direction; free time, social activities, and more.

Scroll down to read more about our speakers and leaders.

The Franciscan Center is located on eight acres along the eastern banks of the Hillsborough River in Tampa. Double rooms will be $600 per person, and single rooms will be $650; accessible rooms are available. The registration fee includes program, room, and all meals from dinner on Monday through lunch on Friday.

The Rev. Naomi Washington-Leapheart, a daughter of Detroit, is the Faith Work Director for the National LGBTQ Task Force, the country’s oldest national LGBTQ justice and equality group. In that role, she coordinates the Task Force’s public faith messaging and advocacy and leadership development work in faith communities. Naomi is also an adjunct professor of Theology and Religious Studies at Villanova University.

Before joining the Task Force, Naomi was a faith organizer for POWER, a multi-faith, multi-racial network of congregations in metro Philadelphia. She also served as Co-Pastor and Minister of Music at the Wisdom’s Table at St. Peter’s United Church of Christ. An ordained minister, she earned the Master of Divinity degree from Lancaster Theological Seminary in 2016 and is proudly affiliated with the Fellowship of Affirming Ministries.

Naomi delights in singing with the Philadelphia Threshold Singers, a choir whose mission is to bring audible comfort and kindness at the bedsides of people living in hospice care. Since 2016, Naomi has been a member of the Faith and Spiritual Affairs Advisory Board of the City of Philadelphia Department of Behavioral Health and Disability Services. In 2017, she was appointed to the Mayor’s Commission on LGBT Affairs by Philadelphia mayor John Kenney.

Naomi’s work is included in the volume, From Generation to Generation: A Commemorative Collection of African American Millennial Sermons from the Festival of Preachers 2010-2015 (Chalice Press, 2015). Her writing can also been seen on Medium, Religion Dispatches, and Rewire.News. She regularly preaches and teaches in diverse faith communities around the country.

Naomi shares her life with her wife, Kentina, a chaplain and religious educator. Together, they are raising a curious, energetic, future Oscar-winning middle-schooler.

The Rev. Erin Counihan serves as pastor at Oak Hill Presbyterian Church in St. Louis, Missouri. Through trial and error and more trial again, she and the congregation she serves have worked to join in a powerful neighbor-led movement for justice and change in St. Louis. Erin is serious about Jesus’ call to community and radical love and puts hope in the bold ways her neighbors, those of faith traditions and those who claim no tradition, go about living that call together.

Erin serves as a leader with Metropolitan Congregations United (a local faith based community organizing group), is a recent past moderator of the Presbytery of Giddings-Lovejoy, and was part of the team that organized the public action to End Cash Bail at the Presbyterian Church (USA)’s 223rd General Assembly gathering in St. Louis in June 2018. Erin holds a BA in Politics and Government from Ohio Wesleyan University and an MDiv from Princeton Theological Seminary.

The Rev. Hannah Adair Bonner is the Director of Frontera Wesley, the Wesley Foundation of Tucson. She received her masters at Duke Divinity School, and was ordained an Elder in the Eastern Pennsylvania Annual Conference of the United Methodist Church in 2012. After serving as a local church pastor, and a Youth & Young Adult resource person for the Northeastern Jurisdiction of the United Methodist Church, she curated a community of young artists in Houston, Texas. In 2016, she was recognized as one of the “16 Faith Leaders to Watch in 2016” by the Center for American Progress, inducted as an honorary member of Sigma Gamma Rho Sorority, Inc., and given the Prathia Hall Social Justice Award by Women Preach. Her first curriculum, published by Abingdon Press in 2016, is entitled “The Shout: Finding the Prophetic Voice in Unexpected Places.”

Dedicated to amplifying the voices of young women, she has produced two short film series as resources for the church, as well as a documentary released in 2017, “Awaken the Voice.”  She herself was featured in a series of teaching videos from RethinkChurch, and in the HBO documentary “Say Her Name: The Life and Death of Sandra Bland.” When she is not volunteering at The Inn or baking cookies for students, Hannah can be found most evenings relaxing with her dog, Esperanza.

The Rev. Dr. Shaun Whitehead is a native of Chicago, Illinois, and a graduate of McCormick Theological Seminary, Chicago, Illinois, where she received a Master of Divinity degree. Her D.Min thesis was “Making Room: Preaching in a Religiously and Culturally Pluralistic Context.” She is an ordained minister in the United Church of Christ and is an active member in the (AAWIM) African American Women in Ministry organization within the UCC. Shaun has been a worship leader in small and large gatherings, from churches to festivals and national conferences.

As Associate Chaplain at St. Lawrence University, Rev. Dr. Whitehead works with the University Chaplain as a spiritual leader on campus. Shaun is the pastor of the weekly Gospel Service at St. Lawrence, an inclusive and welcoming Christian community. She leads workshops on the history and singing of Spirituals, music of the Civil Rights Movement, and Gospel music. Through music, she works to bring people together across racial/ethnic/cultural/religious difference.  She sees her call as embodying the all-encompassing love of God through breaking down barriers and building relationships that are inclusive, reconciling, and affirming. 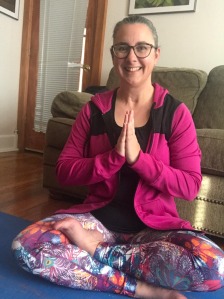 The Rev. Beth Birkholz has been practicing yoga for more than 20 years. She has dabbled in all styles but is trained in Ashtanga, which is a classical form from India that teaches you to balance your body every time you practice. Beth teaches yoga at Holy Cross Church in Livonia, Michigan, where she is co-pastor with her husband, and helps facilitate retreats that use the liturgical season as a jumping off point for yoga and other spiritual practices that involve the body. She LOVES teaching yoga to pastors because it gets us out of our heads and more aware of our beautiful, messy bodies, and the divine wisdom that they hold.

Sr. Anne Dougherty, OSF, D. Min recently retired as President and CEO of the Franciscan Center in Tampa. Originally from Philadelphia, Sr. Anne is a Franciscan Sister of Allegany, NY. She holds a master’s degree in counseling psychology from Nova Southeastern University and a doctorate in pastoral counseling from the Graduate Theological Foundation. She is certified in critical stress management and serves as chaplain to both the Tampa Police Department and the FBI Tampa. She also currently serves on the Tampa Bay Regional Critical Incident Team. Sister Anne is certified as a spiritual director and received her training from Mount Carmel Spiritual Centre in Canada, and the Haden Institute in North Carolina. Sr. Anne directs Operation Restore for First Responders Post Trauma Training and Compassion Fatigue retreats. Sign-up for appointments with Sr. Anne will be available at the event.

The Reverend Martha K. Spong is an author, a pastor, and a leadership coach who empowers clergywomen to meet their goals in ministry and life. She did her coach training through Auburn Seminary in 2016 and is an Associate Certified Coach (International Coach Federation). Her latest book, Denial is My Spiritual Practice (and Other Failures of Faith), coauthored with Rachel G. Hackenberg, explores what happens when you feel you have failed at faith, or the faith you have been taught has failed you, telling stories about illness, abuse, divorce, and coming out, in conversation with scripture. Martha is the Executive Director of RevGalBlogPals and the editor of There’s a Woman in the Pulpit, a collection of essays more than fifty clergywomen. She lives with her family in South Central Pennsylvania. Sign-up for appointments with Martha will be available at the event.

Founded in 2005, RevGalBlogPals creates support, resources and community for clergywomen and other women in ministry via our website, Facebook group and Continuing Education events. We are international and broadly ecumenical, committed to the work of anti-racism, and open to and affirming of LGBTQIA+ people. At the Big Event, we welcome clergywomen regardless of denomination, as well as women engaged in other ministry work.