The booth at the craft fair fascinated me with its pretty, shiny metal jewelry made of bullets. I nudged my husband. “Do you think it’s a critique or a celebration?” He sized up the stall, its inventory, its owners. ‘Celebration,” he judged, confidently. I sighed. He was probably right. Still, I wish I’d asked. Either way, it would have made for an interesting conversation about the remaking of such things into adornments, or perhaps idols. After all, the cross itself was once a symbol of execution, not of new life.

On Tuesday of Holy Week I arrived early at Pilgrim Congregational UCC in Tremont, and sat on the steps,

watching Michael Martin set up the #BeatingGuns forge that he and Shane Claiborne were touring around the country. He prepared its fodder with a circular saw.

Later, inside the church, God Before Guns co-founder David Eggert described how he had bought the AR-15 that Michael had just sawn into pieces from a stranger he found on-line, making the perfectly legal transfer in an anonymous parking lot, without any regulatory interference, registration, or background check (the seller did look at David’s ID to check that he was an in-state resident, but there was no paperwork involved). This weapon was one of around 750 guns including about 60 assault rifles available for private purchase in the area that day. This gun was the same kind that was employed to devastating effect in Sandy Hook, in Parkland, in Pittsburgh, and most recently, it seems, at the Chabad of Poway, California. Now, it would become part of the mission to put into practice the enduring prophetic word that turns swords into plough shares, beating guns into tools for growth, gardens, and other life-giving implements.

Shane Claiborne’ and Michael Martin’s book, Beating Guns, is subtitled, Hope for people who are weary of violence (Brazos Press, 2019). Hope, like its cousins faith and love, is strengthened by exercise, and energized by working out. The grief that visited that church on the west side of Cleveland in Holy Week, rippling out in concentric circles from the gravesides of the lost, had already found its own transformation into activism, intervention, wrestling a new life out of the death that interrupted families and upended the lives of countless others. 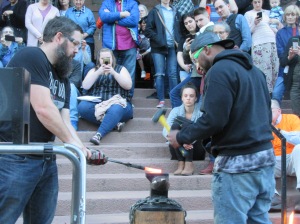 Tamir Rice, forever twelve years old, whose blood still cries out from the corner of West Blvd and Detroit, lamenting the pain, the injustice and betrayal of his death. We heard from a young man who had lived on both sides of the gun, and who had had enough of its violence, death-dealing, and fear-mongering. They led us out to the forge set up beside the sidewalk, and partnered their passion with its heat to hammer out the metal of a gun to make a garden tool.

God Before Guns is an interfaith group, and the prophetic message of swords becoming ploughshares predates Christianity by centuries. Still, as Holy Week drew on toward the cross and the grave, and as a Christian priest, I was haunted by the artistic, prophetic, and spiritual relationship between the repurposing of the guns we saw melted down and pounded out by victims of gun violence and their grieving loved ones on Tuesday night, and the way in which the death-dealing cross was decommissioned and given new meaning by the resurrection of Jesus Christ.

“We cannot carry a cross in one hand and a weapon in the other,” Shane and Michael write in their book (Claiborne & Martin, 171); and yet isn’t that exactly what the Roman soldiers who crucified Christ carried?

We may not raise from the dead the children mourned over Tuesday night. That much is beyond us. Perhaps it is beyond us, too, to render the bullet as unremarkable, as suitable as an adornment or a piece of jewelry as a cross; stripped of (much of) its power to horrify and surrendered of (most of) its death-inducing properties. I wonder, though: is it too much to ask of God, for one more transformative act of astonishing resurrection?

The Revd Rosalind C Hughes serves as the parish priest of the Church of the Epiphany (Episcopal) in Euclid, Ohio. She writes regularly for the Episcopal Cafe and on her own blog, over the water, where there are more photos of the Holy Week event described above. Her first book, A Family Like Mine: Biblical stories of love, loss, and longing, is scheduled for publication by Upper Room Books in spring, 2020.

2 thoughts on “The Pastoral is Political: #BeatingGuns”